Magnetron failures and why they fail.

The magnetron can fail in several ways, many of which produce obvious visual symptoms that can be seen and require no testing with a meter.

Components in a magnetron. 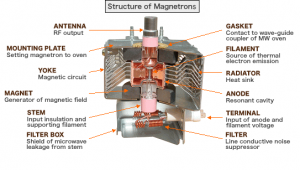 When the magnetron must be replaced, here are some Magnetron Replacement Considerations

Following is a pictorial list of common magnetron failures that are visible, along with their respective symptoms and solutions.

Insulator breakdown begins with a tiny burned spot on the magnetron insulator, then with each subsequent cook cycle, progressively produces stronger arcing and burning, eventually leaving clear visual evidence of the failure as shown in the picture to the right

Solution: Replace the magnetron and change the terminals making sure they fit properly.

This is caused by the magnetron over heating, some instances this is because of reflected microwave energy.

Burnt or melted antenna cap.
Burned Dome (or Antenna) caused by arcing due to reflected microwave energy {back feeding}. When this occurs, check for a stalled or arcing stirrer blade or non-rotating antenna assembly. In many commercial models with multiple magnetrons, the cooking tray must be raised to inspect the condition of the lower antenna assembly. 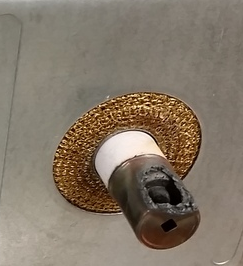 or you may see this inside the cavity 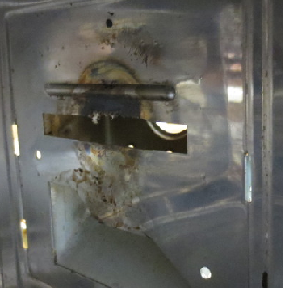 Symptoms: Weak or no heat, arcing sound during cook cycle

Loose Magnetron Filament Connectors / Discoloration of the connector(s) or plastic insulator(s)
If the connectors that slip onto the magnetron filament terminals become loose or are improperly crimped, it causes a build up of resistive heat. As this occurs the connection further deteriorates causing the following visual symptoms Small blackened pits in the magnetron terminal(s)
Melted, and decayed appearance
Also, as noted above, an unusually fearsome spark is produced when discharging the capacitor.
Symptoms: Intermittent and/or low heat initially, then eventually no heat

Solution: Repair defective terminals as follows:
Either (1) Clean the burned/pitted magnetron terminals and replace the slip-on connectors, making sure they fit tightly on the terminals; or (2) Cutaway burned wire and connector(s). (Make sure there is enough remaining wire to reach with some slack) Clean terminals to prepare for soldering. Solder the filament leads directly to the magnetron. Be careful not to apply soldering heat any longer than necessary.

© 2015  |  Magsells, Microwave Oven Parts and Magentrons  |  Sitemap  |  Cookies  |  Site by IOW Geek
Back to Top
We use cookies to ensure that we give you the best experience on our website. By clicking OK you confirm you agree to this, alternatively click read more to view our privacy policy.OKRead more